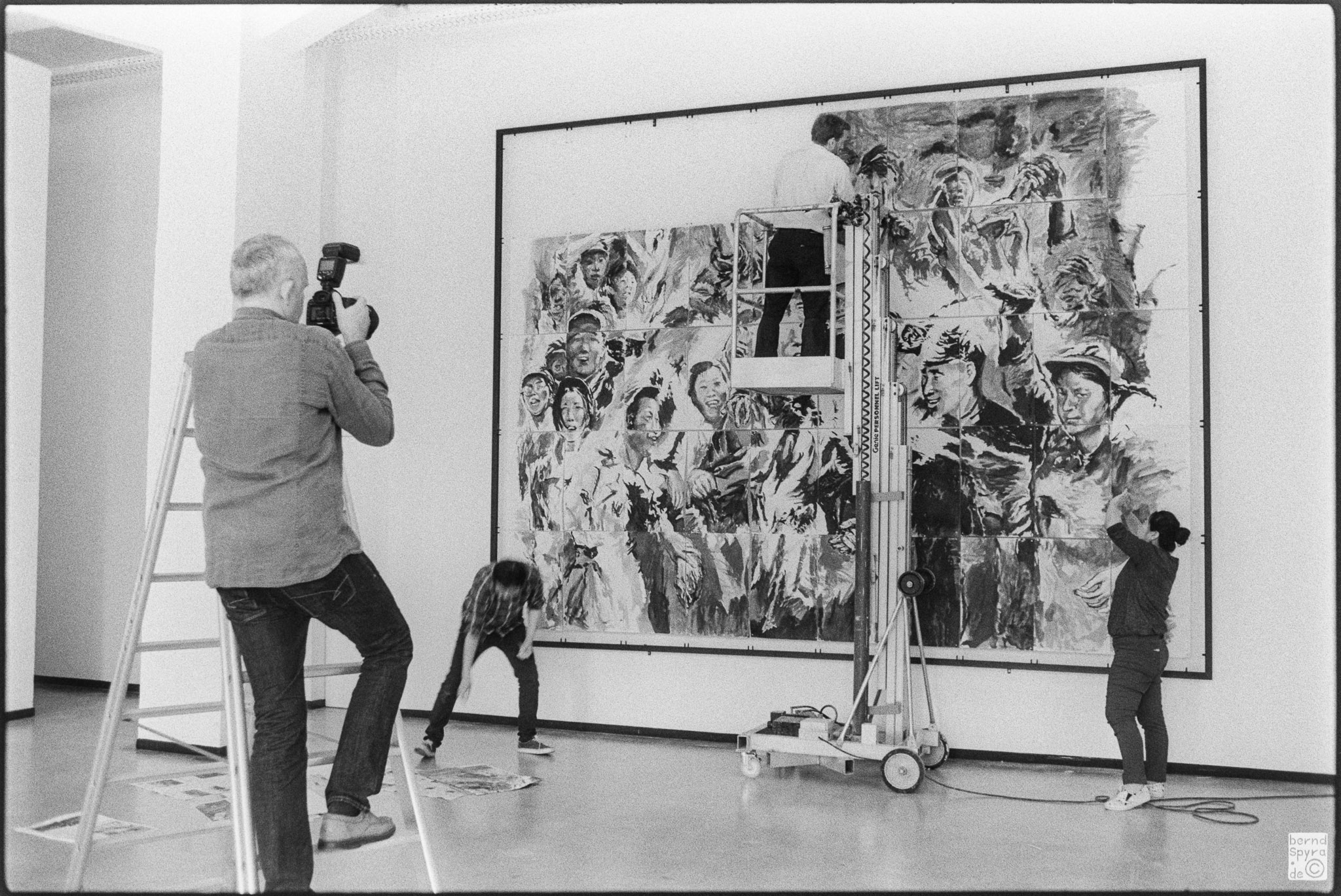 Unacknowledged by the art community or society at large, in November 2016 Hamburg saw the first large scale exhibition of an art project to tackle the public memory — or lack therof — of the traumatic “Great Proletarian Cultural Revolution”, unleashed by Mao Zedong in 1966. As far as I know, the project initiated by Ni Shaofeng, in which he and his friend Deng Huaidong appropriated propaganda photos made during the Cultural Revolution and transformed them into disfigured large scale ink installations and oil paintings, was the first of its kind in the world.

I was lucky to be able to accompany most of the preparatory work leading up to the exhibition with my camera. Now that all the films have been developed and the negatives sorted, I want to share the impressions I captured of the exhibition.

You can find my photos documenting the exhibition here, or through the menu of this homepage.

This October I had the opportunity to help with preparing an exhibition at Hamburg’s Institut Française: “Pekin 1966” with photos taken by Solange Brand. As a reward for helping to put the photos on the walls, the other students and me got a copy of Mrs. Brand’s photobook. I want to share my impression of the book in a short review:

Solange Brand went to Beijing in 1965 when she was just 19 years old, taking up the position of a typist at the French Embassy in Beijing, where she worked for the next three years. She was thus a witness of the Great Cultural Revolution, which Mao Zedong unleashed in 1966. During her spare time, she roamed the streets of Beijing with a camera (other places would have required a special permit), taking photos of China and the Chinese during this spectacular period of history. The fact that the cameras she used were all Pentax SLRs established a direct connection with me: I also use Pentax SLRs regularly. While today the name doesn’t carry the same weight anymore as for example Leica or Nikon, Asahi Optical’s Pentax was the first 35mm SLR developed in Japan, and the cameras of Asahi Optical Company offered a high quality at an affordable price, thus becoming something like the Volkswagen of SLR-cameras during the 60s and 70s. Obviously back in 1966, around the time when Asahi Optical, confident of their cameras quality, used the advertising slogan “Just hold a Pentax”, Solange Brand had no reservations to use a Pentax to record her experience of Beijing-life. Much later on, in the 1980s, Solange Brand became art director at the renowned Le Monde Diplomatique, a post she held for 25 years. Only recently (2005) has she decided to publish her wonderful photos of that bygone era.

The book is printed as a leporello, meaning all the photos are printed on one long strip of paper which is folded like a concertina to fit between the two covers of the book. The covers can be securely connected with a little red ribbon to protect the folded paper. It is possible to look at the photos “page by page”, but you can also unfold the whole strip and look at all photos side by side. This creates two effects with the reader/viewer: When folded and leafed through page by page, the thick twice-folded paper of the pages, combined with the “historic air” of the photos evokes the feeling of holding a photo album in hand, reminding us that these photos were in fact taken by Solange Brand and in a way we — as the viewers — share her own personal memories of Beijing in 1966/67. When unfolded, the effect is similar to seeing the photos on the walls of an exhibition space, allowing the pictures to communicate with each other and the viewer in a way that trancends single pages. You will need about a dozen meters of space to unfold the book completely, though.

Accompanying the photos are a short essay by Françoise Denoyelle, university professor at Louis Lumière (Paris), testimonies by a handful of Chinese people living in China and abroad collected by Kate Fletcher and Marina Le Guennec in 2004, as well as a short text by Solange Brand herself. These are all in French, but most editions of the book sold internationally contain a leaflet with English translations of the texts.

The photos which Solange Brand took during the three years she was in Beijing are remarkable in more than one aspect: Non-propaganda photos of China from this time are rarely published. While it is not difficult to find shots from old family albums on chinese fleamarkets, it is next to impossible to find simple scenes of everyday life: Film was a scarce commodity, and even if private persons would have been able to get their hands on a few rolls of film, it would have never been “wasted” on simple shots on the street, instead beeing used for commemorative shots of marriages, birthdays, funerals and the like. This would be true for black and white film, but even more so for colour negative or slide film, which was hard to get even for the professionals of the press apparatus. Photos taken by outsiders like Solange Brand thus offer a rare glimpse on ordinary life during extraordinary times. Her status of an outsider might even have helped with getting these “incidental” photos: Unable to speak Chinese and not being versed in the complex political situation of the time, she had no choice but to naively photograph who- and whatever she encountered on the street, not judging the scenes by political or social significance, but on their aesthic and emotional appeal to her. The result are photos that — even ignoring their historical background — are a pleasure to look at: The colours are subdued and down to earth, contrasting sharply with the “heroic” colour palette used in other photos of China during that time. Looking at the photos, you can almost feel the dust and sand in Beijing’s skies. Furthermore the photos are composed with a good feeling for rhythm, which invites the viewer to take some time to immerse oneself in the pictures and savour all the little details they contain.

The photos are printed on two pages — right across the fold — which I normally abhor, but in this case the leporello folding of the book still allows the pages to be completely flat when open, thus not marring the pictures.

As someone who also tried to come to terms with China photographically, just hearing about them I was immediately intrigued by the photographs of Solange Brand. Seeing them for the first time when putting them on the walls of the Institut Français proved to be no disappointment: The photos are of the highest quality, capturing the extraordinary aspects of ordinary situations, which for me is a mark of great (documentary) photography.

Especially when compared to the rigid way Chinese propaganda photos of the same time period depict their subjects, Mrs. Brand’s photos seemingly offer a much more “real” depiction of China in those years. But where does this sense of reality come from? Perhaps from the imperfections in her photos? The dusty, smogfilled air of Beijing? The motion blur of bicyclists? Persons out of focus in the fore- and background? Instances of camera movement? Even though most probably just artifacts of her equipment, these things ultimatively also represent “choices” made by the photographer in confronting the subject matter which shaped the final picture. (Coincidentally the common propaganda photos represent another set of possible choices of how to deal with China as subject matter.) Choices like avoiding the use of a tripod, flash or other kinds of artificial lighting and refraining from posing the subjects (or spending too much time on framing a scene) all result in the mentioned “imperfections” and thus a spontaneous, authentic quality of the photos, or at least an impression of that, which gives the viewer the feeling of seeing a vivid visual eyewitness account. But does this understanding of the equipment’s technical limits as explicit or implicit (creative) choices turn “documentary” photography into a mere style within the bigger context of art photography? Can there be more to be discovered in these pictures than “beauty”? Are they “authentic”? Keeping in mind that Solange Brand did not speak Chinese in 1966/67 and didn’t have a clue about the inner social and political situation of China, how could her photographs be more authentic than the ones taken by professional chinese photographers of the time? Do we feel her naive approach ensures she didn’t forge or fabricate aspects of these pictures? What are we seeing here in this pictures? Chance or intention?

These are questions which can be asked about many photos, not just about the ones taken by Solange Brand, or taken in China. I don’t feel qualified to answer these questions, but I do feel fortunate to have met Mrs. Brand and saw her pictures. If you have a chance to see her photos in an exhibition, go for it. If not, the book is also a wonderful way to discover her pictures of China.

Update (08.07.2017): Fairly recently, Solange Brand made most of her photographs available on a homepage, including some not even printed in the book. Absolutely worth a look!